Helicopter Ride NYC: What To Know Before You Fly – HeliNY Tour Review 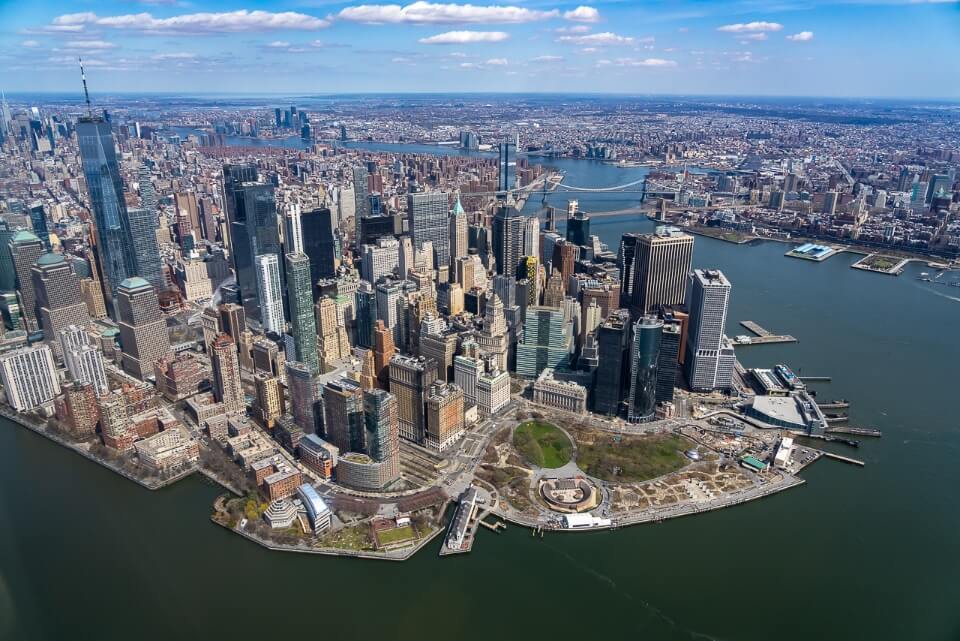 Taking a helicopter ride over NYC with tour company HeliNY was our final hoorah after three months exploring, photographing and temporarily living in New York City.

Is there a better way to soak up the world’s most famous urban landscape than soaring high above its remarkable buildings, landmarks and skylines? Flying over Manhattan is certainly one of the top bucket list things to do in New York City.

From the bustling streets of Downtown and Midtown, intimidating and never-ending concrete skyscrapers tower high into the sky. But from the air, the extraordinary perspective of Manhattan’s famous sprawling concrete jungle is far easier to comprehend.

We want to share our helicopter ride experience with you and by the end of this guide, you will be able to decide if HeliNY is the best helicopter tour for your own NYC itinerary.

*Please note this post may contain affiliate links. If you click on one of them, we may earn a small commission at no extra cost to you! We recommend only products we use and as always, all ideas or opinions expressed in this post are entirely ours. Thank you for the support and happy travels!*

Why Take A Helicopter Ride in NYC?

Taking a luxury helicopter ride over NYC is going to suck up a significant chunk of cash and time out of your travel budget and itinerary. But it’s also going to be one of the best and most exhilarating experiences you have on your visit to the city.

Let’s take a look at the top reasons to fly over NYC on a helicopter tour:

Are There Any Differences Between Tours?

Here’s what you need to know about choosing a helicopter ride over NYC:

Some tours fly directly over the buildings of Manhattan, whereas others fly along the Hudson River or over Brooklyn.

Certain companies offer a ‘doors off’ helicopter ride over NYC, but they have specific rules. Some helicopter tours take off and land in Manhattan, but others can only fly from and back to New Jersey.

Let’s get into the specifics.

Where Is the Heliport in NYC?

You can choose a helicopter ride over NYC departing from either New Jersey or Downtown Manhattan.

The heliport in Manhattan is located at 6 East River Piers, near the Staten Island ferry and Governors Island ferry.

When booking your NYC hotel, the likelihood is you’ll be staying somewhere around Central Park, Midtown or Lower Manhattan if visiting the city, which means the Manhattan heliport is much easier to access.

How Much Does A Helicopter Ride in NYC Cost?

So how much does it cost to ride over NYC in a helicopter?

Well, it depends on what you want to see and more importantly, which deals the companies are running at the time you are in New York City.

Here are the prices for each route at time of writing (May 2021) with HeliNY:

*Each of the tour prices listed are currently on special offer, so you will need to check for updated prices for the dates of your visit to New York.*

How Long Does The Flight Last?

As mentioned above, you can choose the time vs cost package to suit your NYC travel budget.

We can tell you from experience that our flight with a suggested timeframe of 17-20 minutes could have lasted 5 minutes or an hour and we wouldn’t have known.

You will find that time in the air vanishes and before you know it you’re walking out of the heliport back into Lower Manhattan.

What Happens Before The Ride?

If you booked in advance, you will walk into the heliport having already signed a waiver sent to your email account.

Note: Each person has to sign a waiver, so if you booked in advance for 2 people, both of you need to sign an individual waiver.

You will then put any belongings in a locker, except for a camera, sunglasses, cell phones and keys. Nothing else can go on the flight with you. No hats, scarves, bags or loose clothing items.

Larger bags will not fit into lockers and must be left with a member of staff in the pre-flight room.

You will be provided a life jacket in case of landing on water before watching a safety briefing on a tv monitor and lining up by the helipad door.

You’re buckled in for your helicopter ride over NYC.

Up to 6 passengers can share one helicopter tour over NYC – two up front with the pilot and four in the main cabin.

But it all depends on how busy it is during the time of your scheduled flight. You could have just one other or five others.

If you want a private tour, you can just book all 6 seats – but that would be an eye-watering expense!

How Are The Seating Arrangements Determined?

Seating is pre-determined according to passenger weight in order to efficiently distribute the total weight throughout the helicopter. You don’t want to go up in a lopsided chopper!

The maximum weight limit per passenger is 275lbs (125kg). Passengers who are bordering around this weight may have to wait for a flight in which a proportionate weight can balance the helicopter.

You can make a request for a specific seat but there are absolutely no obligations to put you in that seat if it may compromise the safety of passengers.

Remember, you and everyone else on the flight are inside a tiny capsule at 1500 – 2000 ft above New York!

What Is The Best Time Of Day For A Helicopter Ride?

Choosing the right time of day will be more important to some than others.

Is The Price Worth It?

Hundreds of dollars per person for less than half an hour in the air is pretty steep. So, is it really worth spending a big chunk of your New York City travel budget?

The easy answer is yes, it is worth the money. As long as you can comfortably afford it.

Imagine taking a helicopter ride over your home town or city, what would you see?

If you have any intentions of taking a helicopter ride at some point, you might as well make it over an iconic place like NYC.

However, if your budget is fairly tight and you’re on the fence about blowing what you have left on a helicopter tour, we would suggest you very carefully think about what you won’t be able to do in NYC as a result.

How To Choose A Company You Trust

We strongly recommend you check out the websites of each helicopter tour company in NYC.

Why Choose HeliNY Over The Competition?

Why did we choose HeliNY and more importantly, why should you?

Our top priorities were safety, cleanliness and price. We also preferred a helicopter ride departing in Manhattan as opposed to New Jersey.

It was a baking hot NYC early Spring day with a clear blue sky and the city was just coming back to life after a long, hard, covid hit Winter.

We arrived a few minutes early for our scheduled 2pm flight time, so waited right outside the pier on a bench watching as others took off and landed.

‘The Ultimate Tour’ is the most popular HeliNY package, so we went with the general consensus. After checking in, watching the safety brief and putting our belongings in a locker, we met the three other passengers who would share our ride.

Before boarding the helicopter, HeliNY will take a photograph of each group in front of a helicopter. The two of us had our photo taken and were ushered to our seats.

We had the right side of the helicopter, Mark back to back with the pilot and Kristen opposite Mark. Headsets are provided to listen as the pilot points out various landmarks along the flight path.

Before we knew it, we were in the air and heading out into the East River. Bank right, gain elevation and within 30 seconds we were circling around the Statue of Liberty and Ellis Island.

Quickly moving on, we had the ‘money shot’ of Lower Manhattan skyline in a V shape with both East and Hudson Rivers. Unfortunately, our orientation wasn’t directly head on.

The route then traced the center of the Hudson River, passing by One World Trade Center, Empire State Building, Times Square, Edge at Hudson Yards, Midtown and Central Park.

It felt like we’d been in the air 2 minutes by the time we reached Yankee Stadium and George Washington Bridge to turn around.

On the return leg, we followed the exact same path along the Hudson, except this time the passengers next to us had the Manhattan view and we had the New Jersey view.

One more look at Lady Liberty and a left bank brought us around in line of sight for Brooklyn Bridge before landing back on the big H.

Back in the heliport we took a copy of our photograph in front of the helicopters, before picking our gear up and leaving back into the beautiful sunshine in Lower Manhattan.

You will take home some amazing images from one of the best NYC photography locations of all – from above!

The only downside to choosing HeliNY over a helicopter tour with ‘doors off’ is clear photography. And this really only applies to any serious hobbyist or professional photographers / vloggers / instagrammers.

But in truth, the difference is minimal. You just won’t get ‘that’ instagram shoe shot.

If possible, you want to sit on the right side of the helicopter as you look forward. This will allow you to see the best bits of Manhattan on the first ‘leg’ of the flight, with the sun to your back.

How To Find More Information

If you read this guide to flying over NYC in a helicopter and think you want to try it for yourself, be sure to do your own research. Pick the right company for your needs and pick a tour you can afford.

Ideally, you will be able to choose a flight path that takes in the best and most iconic NYC landmarks.

To read more about HeliNY, what they offer, FAQ’s and most importantly – current prices, click here to visit the HeliNY website.

We hope this travel guide helps you decide if HeliNY is the right tour company for you to take a helicopter ride over Manhattan NYC!

Have you been to New York City? Would you take a ride in a helicopter?

Please let us know if you have any questions or need any help planning your visit.

Was This Post Helpful? Pin It For Your Visit!

How To Visit Devils Tower National Monument In Wyoming

Where To Stay At Grand Canyon: Best Hotels Inside And Near The Park

4 Days In New York Itinerary: How To Plan The Perfect NYC Trip

Hi! We're Mark & Kristen Morgan, two scientists who put our careers on hold in 2018 to live our dreams of travel and adventure. Now, we help travelers like you plan efficient itineraries for travel, hiking and photography. Click the image to learn more!

STAY IN THE LOOP

Sign up to receive our latest blog posts, updates and travel itineraries from around the world.